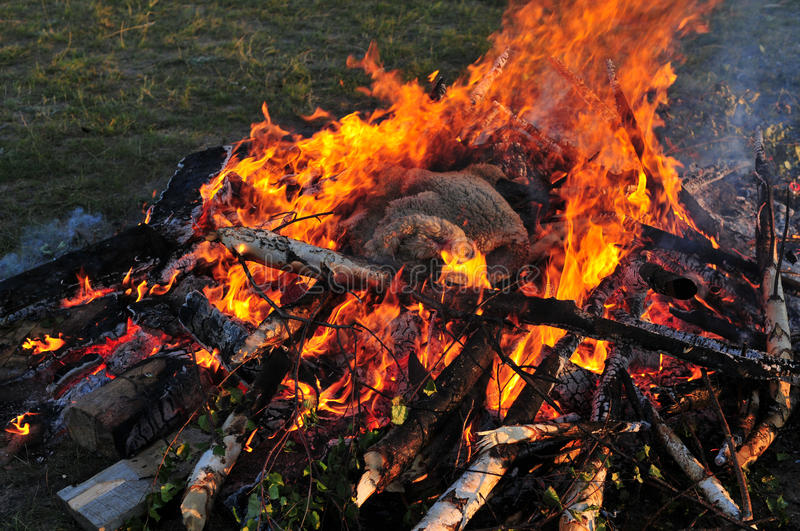 Nothing makes heterodox Jews squirm queasily – and probably just skip to the next page – like the prayer book’s pleas that the Jerusalem Temple be rebuilt and animal sacrifices be restored. There are plenty of very legitimate reasons why, from the seeming brutality and bloodiness of sacred barbecue to the fear (sadly warranted) of aligning with those fundamentalist extremists who plot to destroy the Mosque of Omar and replace it with a new Beit HaMikdash.

Over the last two centuries, liberal movements have taken scissors to our inherited liturgies to remove those offending passages that did not mesh with what most modern Jews could pray for. It is true, after all, that I and my fellow heterodox Jews are glad, in the words of the prophet Hoshea, “to replace the offering of bulls with those of our lips.”

Yet I think all this editing is too hasty. Davveners are not necessarily helped by asking whether each phrase in the siddur forthrightly describes what Jews should believe, stripped of all mystery. The prayer book is not prose, not a newspaper column. It’s poetry, which awakens emotion through metaphors, symbols and myths. And I think the figure of sacrifices – what we offer, not only what we hope for – still has plenty of spiritual power.

One of the casualties in Conservative prayer books comes from the ritzei, 17th blessing of the Amidah. The blessing begins “Lord, accept the people of Israel and their prayer, and restore the worship to the sanctuary of Your shrine.” OK, perhaps a little too Jerusalem focused, but not too objectionable. Then the classic blessing continues: ואשי ישראל ותפילתם באהבה/v’ishei Israel u’tefilatam be’ahavah, “And the loving offerings of Israel and their prayers,” תקבל ברצון/tekabbel beratzon, “accept with grace.”

Rabbinical Assembly, we have a problem.

Since the 1946 Silverman siddur, the phrase ishei Israel, “the offerings of Israel,” was excised. This move stemmed mainly from the apparent association of the word אשה/isheh, or “offering,” with the word אש/esh, or “fire.” At first glance, this prayer could only mean one thing: it was a prayer to resume animal sacrifices.

But that is not the one and only decisive possible interpretation. First of all, as the great Bible scholar Jacob Milgrom observed, isheh derives from a word meaning gift, not necessarily an animal-specific gift. And in fact, Leviticus 2:3 applies the word isheh to vegetarian gifts of flour.

More poetically or mythically, rabbinic tradition has not rested with the treating sacrifices as nothing but sheep fat or ox blood.

As centuries of Sages read them, the system of animal offerings was meant to model human sacrifices. Not, God forbid, that people were slaughtered, and their bodies turned to smoke on the altar. But rather, they knew the point of the Temple cult was to reinforce that the true paradigm of devotion is to dedicate human life to sacred purpose. “Nothing is as dear to God as the human heart,” says the medieval mystical classic the Zohar [Z. Hadash 80a]. When you offer your heart and will, when you devote your body to divine service, this passage asserts, your flesh and blood become like the sacrifices, and your breath become the fire upon the altar. The Torah’s regimen of sacrifices is the mythic paradigm, which our own religious lives make a reality.

The Talmud [Menachot 110a] reports an esoteric tradition that the Archangel Michael is the High Priest in the heavenly temple. The Tosafot [medieval commentators] apply this bit of lore to the phrase ishei Israel. What does the archangel offer upon the heavenly altar? The souls of the righteous who devoted themselves to divine service.

Perhaps to some people this seems extreme or creepy. But if you feel this way, I’d say you’re probably reading overly literally. No one is dying here. They are living more deeply. They are offering themselves to the higher life within the details of their own lives. Personally, I love this strong mythic poetry. Davvening the phrase ishei Israel in my Amidah inspires me to devote myself, my behavior, my heart and mind, as an offering to heaven.

I will close today’s post by carrying that esoteric teaching back to someplace horrible, the Warsaw Ghetto. On Shabbat, October 5, 1940, with his people suffering unimaginably, a Hasidic figure known as the Piascezner Rebbe, R. Kalonymous Kalman Shapira eased his community’s spirit through the mythic image of the Archangel Michael offering the souls of the righteous in the Temple on high. “When people offer their hearts and souls to service, when they study and pray,” he said, “they offer parts of their souls to God. … Today there are no animal sacrifices and no altar. But when we study and pray and worship with all our hearts – this is the Korban today.”

May God accept the loving offerings of Israel with grace.