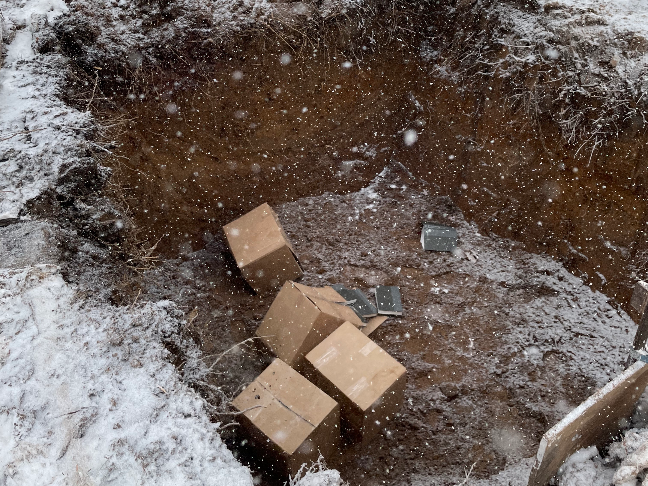 Our long-awaited construction project at Ansche Chesed is about to begin. Off in the distance we can glimpse our expanded lobby with improved safety and disability access, our renewed social hall, and our comfortable and professional offices.

Before we can build, we must demolish. For a century-old building with poor storage space, that means clearing out crannies stuffed with all sorts of oddities. (Our favorite find: a 1907 letter from the wife of the AC treasurer, whose numbers were apparently not adding up. She implored the board to leave her husband alone already, that he was out of town, finally attending to his own business and not the shul’s affairs, and that he would explain everything when he returned to New York!)

Our biggest clearance job had to do with religious books. You probably know that Jewish norms forbid tossing sacred writings into the trash. A worn Torah scroll should be buried with a sainted person. A text containing one of the principal names of God must not be destroyed, and even without divine names, sacred texts deserve burial in a dedicated “hiding chamber” or genizah.

Ansche Chesed had an abundance of material needing genizah. Many were papers our members dropped off for us to dispose of for them, like xeroxes of pages they used to prepare Torah readings, or learning materials from study sessions and Hebrew school lessons.

Others were holy books that people placed in our library, including some old prayer books and bibles, some inherited from long-dead grandparents, some printed in Europe, some with Yiddish translation. (I know, I know. You’re thinking that these might be valuable, but they were mass produced and are not at all rare. Besides, cheap paper from around 1900 literally crumbles in your hand.) Our shelves held volumes from rabbinical school graduates not returning to their Talmuds or day school grads unlikely to return to their Rashis or Mishnas.

By far the largest share of our holy books were the hundreds of prayer books and bibles that once served Ansche Chesed members well. (I know, I know, you’re thinking that some small synagogue somewhere would want them. They don’t.) Some of these were random donations to our library, but the vast majority were purchased specifically for AC’s services, many with book plates noting who had donated them to our community. Some were ragged and torn. Some were intact, just forlorn, superseded by newer editions, no longer in demand.

So many were high holiday prayer books, edited by Adler, Silverman, Birnbaum, Artscroll, and of course by R. Ben Zion Bokser z’l, and – may he be singled out for long life –R. Jules Harlow. Those editors and many others gave us siddurim: DeSola Pool, Rinat Israel, Metsudah, the New Union Prayer book, and Siddur Hadash by R. Sidney Greenberg z’l. Dozens of Haggadot, some nicely bound, some xeroxed and stapled, some edited by the revered Rabbi Maxwell House. Then there were the various bibles: editions by Soncino and Hertz, Koren and the Israeli government, and many others.

Last week, in the snow, I brought more than 60 cartons of these sacred texts to the Ansche Chesed plot in the Riverside Cemetery in Saddle River,  New Jersey. The staff had dug a burial place for our books the size of three full graves. (We laid our books at the feet of Yochanan Muffs, one of our greatest scholars, and beside Ernie and Heidi Kahn, who donated so much support to our community. I found this fitting.)

The workers asked me, respectfully, what Jewish law demanded this be done in the dead of winter. I can appreciate how this scene might have seemed absurd to these seven men. Burying a person is one thing, but venturing into the snow to bury paper and glue? I apologetically explained that our construction schedule, not the Torah, demanded we do this in February.

But I don’t think I could have explained adequately my emotions as they laid these heavy boxes in the cold ground. I tried to summon in my mind the hands that held these texts, the eyes that read their print, the lips that said these words aloud.

The Harlow Machzor was first published in 1972, the Bokser in 1959 and the Silverman in 1939. (Ansche Chesed has been using Lev Shalem only since 2009.) As we laid those cartons down, I tried to imagine how many individual prayers each copy of each book had stimulated. How many Jews held that very copy of that book, now lying in the earth, as they said on Rosh HaShanah: How many will pass away? how many will be born? … Charity, prayer and repentance soften the bitter decree … Human life begins in dust and ends in dust. It is like a broken pot, a faded flower, a passing breeze, a vanishing dream.

How many children recited “Four Questions” from these very Haggadot? How many people followed the Torah readings from these very bibles: the days of creation, the 10 Commandments, Lech Lecha, the Song of the Sea? How many sang Hallel on holidays from these pages? In that large grave, lay holy books from which parents read Shema Israel on the days that their children were called to the Torah as bnei mitzvah. And here lay books that people used when they said Kaddish, after their loved ones died.

Here, I grow mystical. (Not a big stretch for me.) I sense that these books have a spirit. I sense that over these many years these papers absorbed the prayers, tears, fears, sorrows and joys of the Jews who used them.

Yes, they were paper and glue. And they became vessels for Jewish experiences, carrying Jewish hearts.

As the workmen lowered the boxes into the earth, I tried to express my gratitude to the sacred paper and glue, to wish them farewell, by doing what Jews do at funerals: reciting psalms.